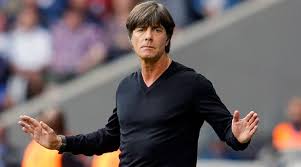 Speaking in a press conference, Loew acknowledged that he has been keeping a close eye on Gotze, who contributed seven goals and seven assists during the recent Bundesliga season, he said: “I’m so happy for Mario (Götze). In the past few months, I have noticed that he is very dynamic and very well-trained. If he keeps up on this path, he will come back to the national team.”

Germany experienced a disappointing World Cup last summer as they were ousted at the group stage and they have since gone through another setback after failing to win any of their Nations League games against France and Netherlands. As such, they have been relegated to League B in the competition and that has certainly triggered the need for change with Loew parting ways with some of the senior statesmen.

At present, the former World Cup champions are preparing for the forthcoming European qualifiers and they should have some confidence going into the fixtures, considering they managed to get the better of the Netherlands during a 3-2 thriller earlier this year. The Germans bagged an early 2-0 lead over the Dutch and they should have scored more, barring the strong resistance from Ronald Koeman’s men.

The 2010 World Cup finalists made a strong comeback during the second period to level the proceedings at the Amsterdam Arena but Nico Schulz came off the bench to secure the winner for the visitors in the final minute of normal time.